Why I dropped DropBox and think pCloud is the perfect solution  for cloud storage. 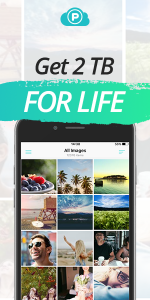 I was originally a devoted early user of Dropbox, but I quickly filled up my allotted capacity of free storage and had to upgrade to a paid subscription. I bought an annual 1TB membership and enjoyed using it for the most part. Rarely any access issues, and as more people became familiar with DropBox it became easier to use for sharing project files with clients (and easier to explain what it was to novice digital users).

However, when it came time to renew I didn’t relish the idea of paying another $100 for the upcoming year and quickly tried to get my file usage back under the free cap of  7GB I’d earned through recruiting new members to Dropbox. The problem was, I’d grown so used to having this giant virtual hard-drive that even after I successfully lowered my use of the storage it would begin to balloon back up.

Then I heard about a special deal on a new cloud storage company called pCloud. They were offering a lifetime deal on their premium plan (500GB) for a crazy low price on one of those “deal” websites. They also had a flat-rate upgrade option to jump to 2TB of lifetime storage for an additional $250 but I held off on that until I made certain pCloud is a reliable provider of cloud-based storage.

After about 3-months of putting pCloud through its paces as an archive, shared drive, and even as a hidden link for sharing bonus content I knew I’d be a lifetime pCloud fan and pulled out my credit card to upgrade.

It has been close to a year now and I’ve never regretted my decision to buy-in on pCloud (especially when my subscription tracking calendar reminds me how much I’d be paying to DropBox every year at renewal time!)

One other thing I really like about pCloud is that their folders just don’t share files — they play files. If I drop a video or audio file into pCloud, I can click a link and quickly see/hear playback without having to download it or open another app, etc. Makes it quick and easy to check the content of a file prior to sharing it, and it makes it super simple for me to share bonus video and audio content with my audience.

Give pCloud a try today and see if you agree.

Here is a special link to a lifetime pCloud deal (never pay DropBox another annual fee!).

Creative powers beyond those of mere mortals...