Quoridor is a game I discovered a couple years ago and it was love at first site. I enjoyed the game so much that I gave it to everyone on my Christmas list that year.

This game is as simple as Tic-Tac-Toe or Connect 4, but has a strategic component which is more akin to Othello (or Reversi if you prefer). Quoridor is available in several different versions now (plastic pieces, travel edition, etc.) but spend the extra couple bucks to get the original version (or deluxe version) with the wooden board and pieces. It’s as sharp to look at as your wits will need to be in order to master this game. 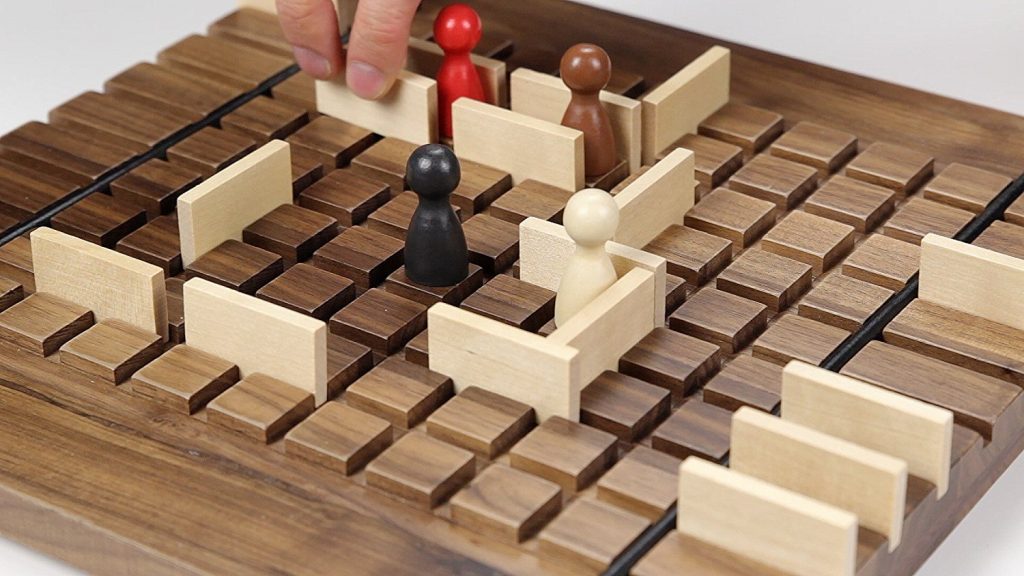 The gist of regular game play is that each player (2-4 players) begin with a single pawn and the goal of moving their game piece from their side of the board to their opponent’s side of the board in order to win the game. Each player also has a finite number of rectangular wooden tiles called Fences. These pieces are used to frustrate your opponent’s progress by blocking movement and forcing them to make detours as they cross the board. On their turn, each player may move their pawn or place a fence.

Players can move one square per turn forward or backward or side-to-side (no diagonal moves) or they can choose to place a single fence on the board. There is a fixed number of fences to use in the game and once a player uses all their fences they cannot get new ones or remove or reposition fences already on the board. Players cannot jump over fences, they have to go around them. This is especially frustrating if you are on the far left of the board and a blocked pathway forces you to go all the way back around to the other side of the board. Fences are permanent. Once a fence is placed by a player it cannot be moved, and it blocks the player who put it on the board just as efficiently as it blocks their opponent.

One of the few rules is that there must always be at least one path (a corridor) which allow players to cross the board. Trumpian philosophies aside, you can’t just erect a bigly wall across the entire board which prevents either player from crossing the board to potentially win the game.

But you can’t waste your valuable selling time just sitting around and playing games, right?

How Quoridor can help you meet your Sales Quota

Here’s my Sales Toys twist on the game… use the goal of making a path across the board to win the game as a metaphor for the sales path you must travel in order to win a sale. Make each fence represent an objection you and your sales team encounter on your way to winning a sale.

Play Quoridor during your company’s sales meeting. Compete against other members of your sales team or your sales manager with the slight rule adjustments listed below.

Each time a player positions a fence on the board, they must also voice a common objection your team hears during the course of selling to your customers:

If the player erecting the fence can’t think of an objection, or repeats an objection they said earlier, the fence is removed from the board and put in a discard pile — barring it from future use during this game.

If the objection hasn’t been previously used in the game the fence is successfully placed on the board. The second player now has a chance to overcome the objection… the fence… the barrier to the sale… by providing a creative response:

The rule of duplication applies to responses just as it does to fences; an original response can only be used once during a game session. However, if the response is original Player 2 can now leap over the objection (the fence) and continue forward progress across the board. If a response is judged weak by the sales team or the player takes too long to respond (using a countdown clock or timed response is up to you) the player will have to go around the fence as outlined in the standard rules of the game.

The winning player is the one who successfully overcomes (or navigates around) the opponent’s objections to reach the other side of the board and close the deal. These revised sales-based rules are easily adapted from individual play to team play (teams take a second or two to huddle up before voicing an objection or response — or take turns).

The obvious benefit to using Quoridor in this manner is that players become more familiar with the most common objections they team hear from customers. It’s been said that there are really only five to ten basic customer objections, and since there are a total of 20 fences which can be used in the game it will quickly become apparent that there are far fewer barriers to making a sale than your team realizes (it will also lead to some pretty ridiculous objections and responses from the players!)

Another benefit is that individual sellers will be exposed to objections and responses that their team members are hearing, which they may not have encountered yet. The team will also hear objections being overcome and will be able to add these new responses to their own arsenal to use in the field on real sales calls.

Finally, getting a sales team to participate in role playing is difficult. Normally talkative and gregarious salespeople become extremely closed mouthed when asked to take center stage and have their method, style, and skills scrutinized by their peers. The sales-adapted rules for Quoridor is basically role playing customer objections and sales responses with an added benefit of a little friendly competition between their peers to earn bragging rights. You’re basically sneaking in role play as part of the game play and that’s a big win for everyone.

Playing Quoridor by these sales rules will help the entire sales team improve strategic thought, enhance quick thinking, and hone objection fighting skills in an arena of play, preparing them for a tough day in the field of encountering and overcoming these very same objections to win new customers.

Order a Quoridor game to use in your next sales meeting.